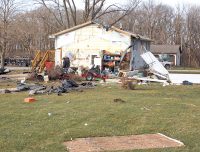 All Rudd volunteer firefighter Tyler Hicks did was hold down a button. During a tornado. And a derecho. In the middle of December.

Hicks doesn’t like to hear people call those actions “heroic,” but heroic or not, news of his actions impressed the bosses at Goddard Enterprises enough for the Oklahoma company to donate a new warning siren system to his community.

“I think it’s great that a big company like that wants to help out a little town like that,” Hicks said.

Rudd City Clerk Ashley Chatfield said that Goddard — a company that manufactures mass-notification systems — is “donating a refurbished siren, and Alliant Energy will donate the labor to set up a new pole for the siren.” The cost of a new siren system is typically more than $20,000.

A company spokesman from Goddard said that they admired Hicks’ story from the rare December tornado that struck Floyd County, destroying four single-family homes and two public buildings in Rudd. The city’s water treatment plant was totally destroyed in the storm, and the public library sustained major damage, losing its roof. The Rudd Historical Society museum building was also a total loss.

Hicks, who has been a volunteer firefighter for about a year, stood outside in the storm to manually hold the siren button down to alert the community. The button was mounted on the same pole as the siren, and all at once the button, the pole and the siren were ripped from his hands by the tornado. Hicks was not injured.

“Someone was watching over me that day,” he said.

Hicks said that the siren system was more than 80 years old, and no longer functioned as initially intended, which was why he had to hold the button down continuously.

“When it was originally designed in the 1940s and 50s, it was supposed to stay on when you push the button, until you hit the cancel button,” Hicks said. “Something must have failed in between 1940 and now.”

So Hicks had to just stand there and hold it down — “riding the storm out,” he said — and the wind picked the siren up and “deposited it quite a ways away from where I was standing.”

“I pushed the button down until there wasn’t a button there to push anymore,” he said. “I signed up to be a volunteer firefighter, and that’s part of the job.”

The new siren system will be a bit more user-friendly, as it will have battery backup and not dependent on the power staying on, and will also have a remote function that allows it to be activated from anywhere in the community — so Hicks or anyone else with the password can push the button from the safety of his home or office, and not outside in the middle of a raging windstorm.

Chatfield said that the rest of the cleanup process in Rudd has come to a “standstill,” as the community is waiting to hear from insurance companies.

“Not much has changed,” she said. “It’s kind of a weird situation, because everything happened in the middle of winter, and now everything’s frozen — these are different variables.”

Some businesses that were forced to close, such as Tanks Bar and Grill, have been able to reopen, and Chatfield said, “I know Larsen’s repair shop is working on getting everything going.”

The library has received more than $11,000 in donations so far, intended to go to the reconstruction of the building, once added to whatever the amount received from insurance.

“At the library, they’re just kind of making a wish list as to what they’d like to see in the new facility,” Chatfield said. “They set up a little area in the council chambers at City Hall, and they’re going through books and trying to salvage what they can.”

Chatfield said that those who were forced from their homes are set up with adequate shelter by their insurance companies.

“We’re still brainstorming for the spring as to how we’re going to arrange our large garbage pickup,” Chatfield said. “We’ll try to find out if residents need any extra help then.”

On the days following the storm, hundreds showed up in Rudd to help with the cleanup, and hundreds more donated money and supplies to help those who needed it.

“I’d like to say thanks to everyone who stopped out, with donations and to help with the cleanup,” Hicks said. “It’s truly appreciated, and it’s great to see small town Iowa come together like that.”

To The Press Get set to “Party in the Heartland” during the annual Fourth of July...

By James Grob, jgrob@charlescitypress.com When the Hildebrand family gets together on Sunday at...